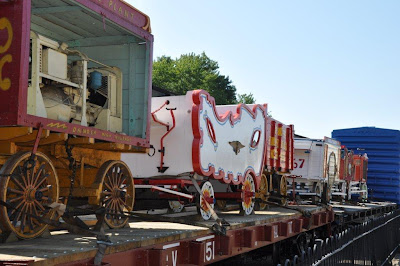 Bruce Hawley has been kind enough to share his trip at the Valley Railroad Museum with all of us. All the photos are from Bruce Hawley. It sounds like it was a lot of fun.
Bob


The Essex event was perfect for little children. (My wife and I brought two of our grand-daughters: ages 5 and 7.) The train consisted of an engine, 3 vintage coaches, two flats with 1/2 sized circus wagons (formerly owned by Bill Brinley), a box car and a caboose. The ringmaster met each guest at the steps of the train. Most of the kids got their pictures taken with the ringmaster as they boarded the train.

The train ride was about 20 minutes. During the trip, the ringmaster gave a little history of the circus and circus trains. He used an old-fashioned (non-powered) megaphone to give his speech. He also told a couple of jokes and gave each child a clown nose. His costume was terrific.

When the circus train arrived on the "lot," it was greeted by clowns who ran along the side of the train. The kids were treated to a 3 or 4 kiddy rides (including a carousel and "bounce house"), face painting and balloon animals by the clowns, a petting zoo with about 15 animals (including a "Ze-donk") and a good Punch & Judy Show. (All of this was included in the $25 ticket.) There were also grease joints with popcorn, soda, hot dogs, etc. Prices were very reasonable. They also had a circus souvenir tent where they sold circus books and toys.

The show lasted about 30-45 minutes. It consisted of "Bucky" the clown-ringmaster-juggler (who was very good) and his female clown-assistant. Next came a funny solo comedy trampoline act which was followed by a clown ("Cheeko") doing an audience participation bit. The final act was an excellent chair balancing act. (Same performer as the trampoline act.) It was just long enough for the little ones.

After the show, we boarded the train back to the parking lot. The ringmaster rode along with us and asked the kids what they liked about the show. Overall. it was very enjoyable. I understand that the event will be repeated next year.
Posted by Bob Cline at 7:17 AM

Didn't Bill have these and his model circus at Steam Town at one time?