King Bros. Circus in the day 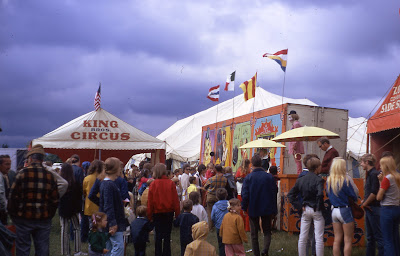 I saw one of the last shows that King Bros had in Newberry, SC. I don`t remember the year but I know it went into the barn shortly thereafter and didn`t come out the next season.

Bob;
What year is this ? I saw King Bros. in California in 1964. I think it was the only time any of these Acme Corp. shows played the west coast.
Jerry Cash

I'm guessing that the tractor cabs in the next photo are like the ones the Beatty show was using in the 1970's.
Bob

The trucks are probably Chevy`s although CBCB had a couple of GMC`s, pretty much the same tractors.