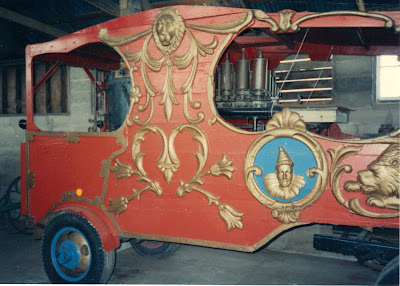 Joe Bradbury wrote a terrific article in the Bandwagon years ago about the five nearly identical steam calliopes, of which this is the only survivng unit. One of the easiest ways to tell them apart was by the center carving, this one having a clown. This one has been radically modified. The rear wheel used to be forward under the arched carvings. The entire back end has been added on. The roofed area has been added on. This steam calliope was at Circus Hall of Fame at one time and is now stored at the Circus City Festival wagon shops in Peru, Indiana.

This photo was taken by Bill Prickett in August of 1993.

This wagon was built to house an air cally. I believe Dr Fischkorn is the one who enlarged it to house the boiler when the steamer was installed.