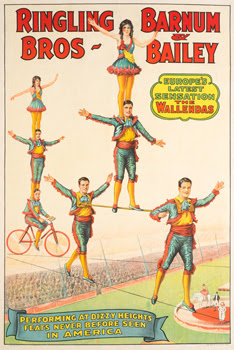 On View in the Gallery

Lecture: The Circus In America


At the turn of the 19th century there were more than 3,000 circuses traveling around the United States. The development of the tent and use of the railroads, the introduction and refinement of advertising, the circus parades, the use of elephants as attractions, and the side show are some of the themes that contributed to the distinctive American quality of the circus. Susan Weber will explore how the European circus was transformed in America into an immense multimedia phenomenon that was eventually billed as the “The Greatest Show On Earth.”

Susan Weber is founder and director of the Bard Graduate Center. 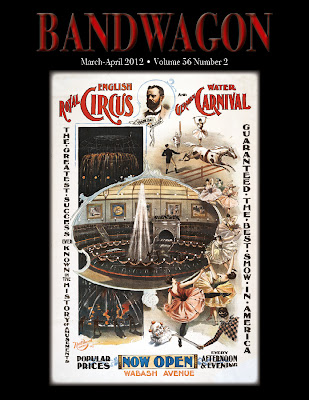 The Latest edition of the Circus Historical Society's periodical the Bandwagon was mailed on Wednesday October 24th. Members should start receiving it next week. For those that aren't members and are steadily missing out on the great history of the circus, get on the Bandwagon as they say and join us on our website at www.circushistory.org
Posted by Bob Cline at 4:06 PM No comments:

I received a terrific phone call from Ivan yesterday telling me he had already had his double lung transplant and was in the process of getting on with the rehabilitation work. Big Thumbs up. He said he felt like a new man again.

Feel free to post some good wishes to him on his fine circus blog at http://www.thecircusblog.com/

Pray ( Hard ) before you Vote! 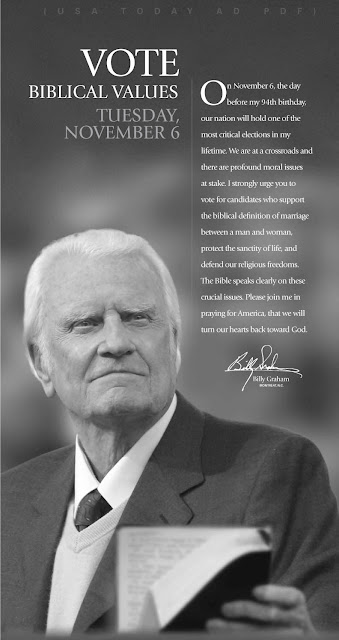 You should be able to double click this to enlarge it enough to read Rev. Billy Graham's message.
Posted by Bob Cline at 7:57 PM No comments:

Photo Albums for your Computer 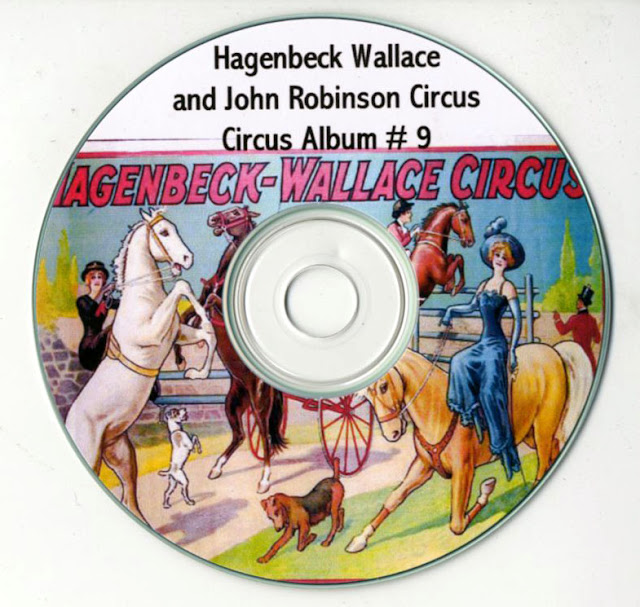 I've been converting many of the photo albums in my possession to computer CDs for a modern way of sharing circus history via photographic images with others at an incredibly reasonable price. With people on eBay trying to sell one photo for $10.00 to 13.00 each, I am offering the computer CDs at an average cost of 10 cents a photo. You can then take the CD to a Film center near you and get copies made for about 30 cents or print them at home or just enjoy going through the CD over and over again.

While I do offer these on eBay, I sell many of them through my website at www.thecircusworld.com
Posted by Bob Cline at 9:17 AM No comments: 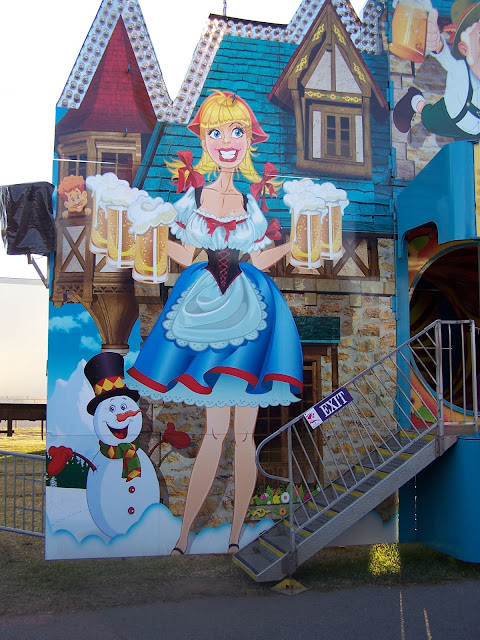 From our Octoberfest to yours, Happy Birthday wishes go out to Big Jim Peterson, owner of the Mighty Peterson Shows and controller of the Million Dollar Blog. Hope you have a grand time my friend!
Posted by Bob Cline at 1:09 PM 2 comments: 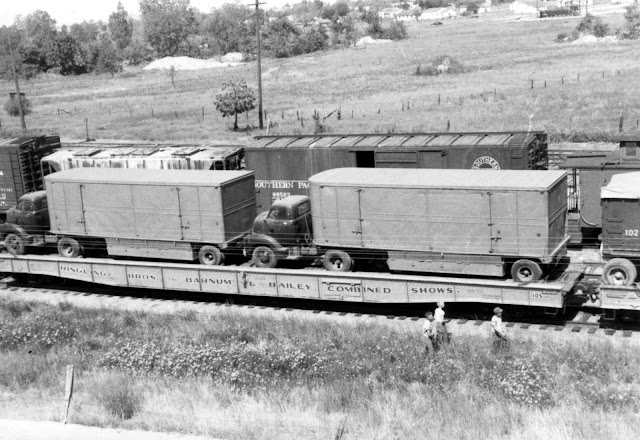 Here are the two Ringling / Barnum units as seen on the train in 1952. I wonder where the dumping stations were back then?
Posted by Bob Cline at 8:53 AM 3 comments: 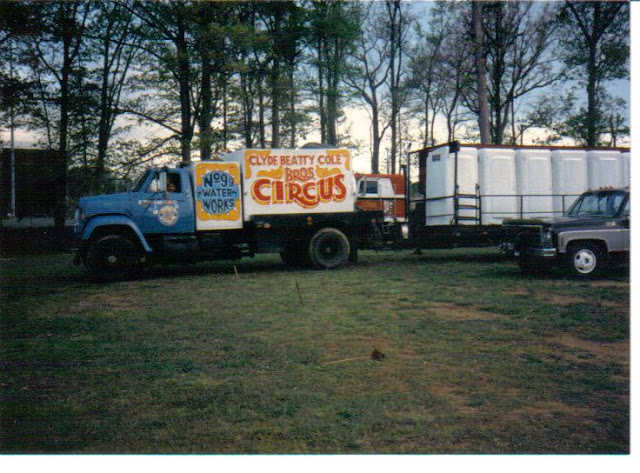 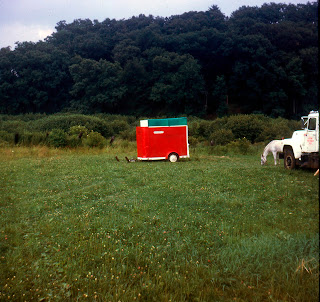 The 1973 and 1974 version on Circus Kirk was a small streamlined version that was pulled by a station wagon.
Posted by Bob Cline at 8:33 AM No comments: 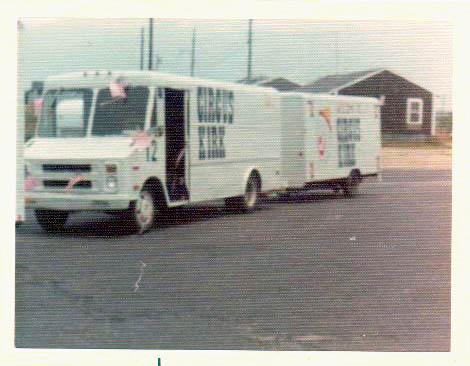 Circus Kirk had changed the unit a couple times over the years. By 1975, ye old toilet had been positioned into an old Bread truck for ease in getting to a dumping station. ( This is a Fred Curchoe photo as found on the Circus Kirk Facebook page )
Posted by Bob Cline at 8:28 AM No comments:

This was a former Ringling / Barnum unit that went to Royal American Shows and eventually came to the Circus World Museum. It was used on the Milwaukee Parade grounds a couple times in the early 1970s.
Posted by Bob Cline at 8:25 AM 1 comment: 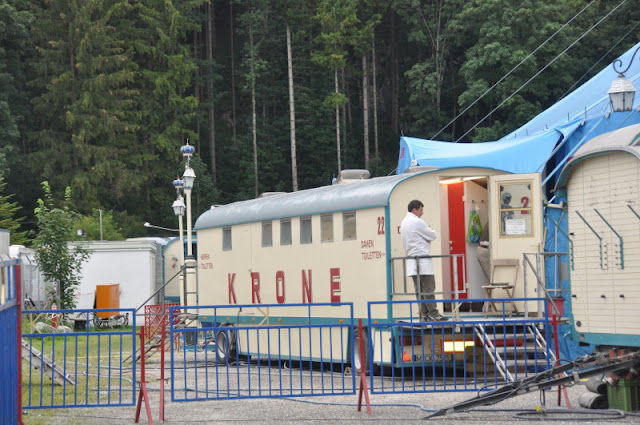 This is Circus Krone's facilities complete with attendant. This was taken by Bruce Hawley this summer.
Posted by Bob Cline at 8:16 AM No comments: 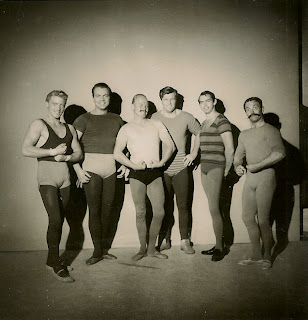 This wise old troupe of veteran performers were the gymnasts, leapers, and teachers on the 1962 movie JUMBO! On the far left is a good friend of mine by the name of Ivan Henry who is part of the J.E. Henry family and a Chimpanzee guy by trade.

Ivan called me tonight to say that all the tests are done and over with. He's met with every doctor and he has his bags packed awaiting a call to allow him to have a double lung transplant at any given moment now.

Best wishes my Friend! We're thinking about you!

CWM Attendance is up.

Attendance and retail sales are on the rise at Circus World Museum in Baraboo, but not at the nine other Wisconsin historical sites.

Circus World is enjoying an 8 percent jump in attendance this year, and revenues have increased more than 2 percent.
So far about 300,004 people have visited the state’s 10 historic sites and spent more than $735,332.95, which is down 2 percent from last year’s figures.
Circus World Executive Director Steve Freese said the downslide in the economy has played a large role in attendance and sales at the historic sites.
Freese noted Circus World offers a coupon — buy one, get one free — distributed at Devil’s Lake State Park throughout the summer. While the park attracted nearly 2 million visitors this year, only 342 redeemed the coupon, which would allow one person into Circus World without paying the $14.95 admission fee.
“That’s pretty stunning to me,” Freese said. “Those people who went to the park decided to stay at the park without taking advantage of our coupon.”
At the largest historic site, Old World Wisconsin in Waukesha County, there was a 1.3 percent decrease in attendance — 41,080 this year as compared to 41,620 last year. This year’s sales at Old World Wisconsin were down nearly 13 percent from $98,671.16 last year to $86,233.91 so far this year.

Circus World shows a larger jump in attendance, with 68,162 as of Tuesday.

All of the sites except Circus World wrap up their seasons at October’s end. Circus World stays open year-round.
Freese said despite a sluggish economy and extreme heat, Circus World enjoyed a great summer.

“About $9 million is spent on trying to get people to come to the Wisconsin Dells and we try to capitalize on that by getting some of those people to come here,” Freese said. “The grandparents want to take their grandchildren somewhere different other than the water parks, so they come here.”
Ringmaster Dave SaLoutos said Circus World is “something that is universally appealing” to all ages.

“This is a place where grandparents, parents and children can come together and have a great time,” he said. 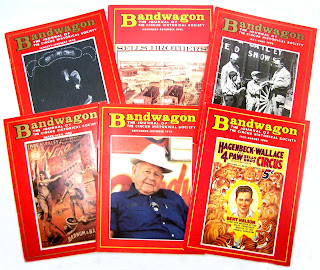 The Circus Historical Society will be offering a huge special on some past editions of the Bandwagon. Each and every special will only be good for two months. The 1991 special has now ended.

We are making the third offering for the entire six issues of 1992. These issues are covered in detail on our website under the Bandwagon Magazine tab, indexes of Bandwagon Articles, then to 1957 to 1999.

Maybe you haven’t been in the CHS for 20 years and would love to read lots more about the circus or maybe you’re looking for that perfect gift already, but you can’t pass up a deal like this.

Includes the shipping in the US!

I never saw the Royal American Shows in operation but I did get to visit their WQ in Tampa on a few occassions over the years. This is the Sedlmayr's family coach which is now housed in the car barns at the Circus World Museum.
Posted by Bob Cline at 5:18 PM No comments:

Here it comes!
Posted by Bob Cline at 5:12 PM No comments:

As far as the eye can see. What a sight this was.
Posted by Bob Cline at 5:10 PM No comments:

One Truck and a trailer fill a 70' flatcar. I wonder how heavy that load was.
Posted by Bob Cline at 5:09 PM No comments: 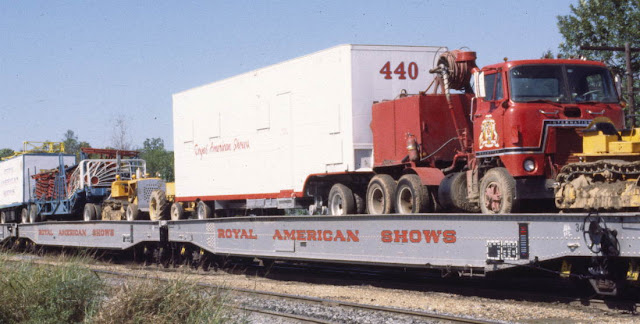 Here are a couple of the fiormer RBBB Thrall flats in use.
Posted by Bob Cline at 5:05 PM No comments: 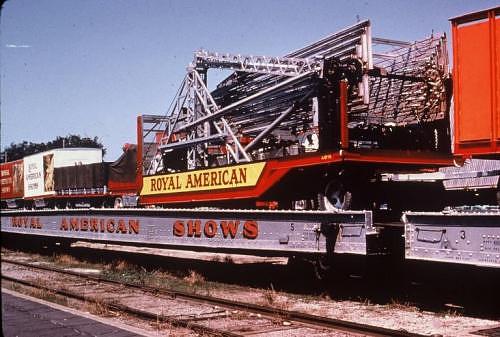 I can see myself driving for miles to follow this train as it unexpectedly went through a crossing that I was sitting at waiting for the train to go through! WOW!
Posted by Bob Cline at 5:02 PM No comments: 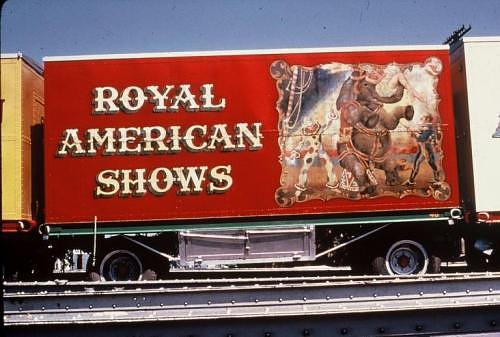 Beautifully painted!
Posted by Bob Cline at 5:00 PM No comments: