The James Bros. Circus was owned by Sid Kellner. It was on the road from 1965 to 1970. The Buckles Woodcock family was there during this time. These photos were all taken in Cleveland, Ohio in 1968. This is my efforts at creating a little artwork for my business. I've been slowly building my website up into the Model Builder's and Historian's paradise. It's got a long way to go, I know, but I'm working on it a little bit more everyday.

Those of you that might be model builders can find new model building items at http://www.thecircusworld.com Look under the Circus Model parts page or the Hobbies and Model pages.

If you are looking for something and can't find it, let me know and I'll see what I can do.

For those of you that enjoy doing research of the performing arts, Google has started to digitize the Billboard magazine going back to 1942 right now. Go to this link to get there.
http://books.google.com/books?id=LRMEAAAAMBAJ&dq=billboard&client=firefox-a&source=gbs_navlinks_s#all_issues_anchor 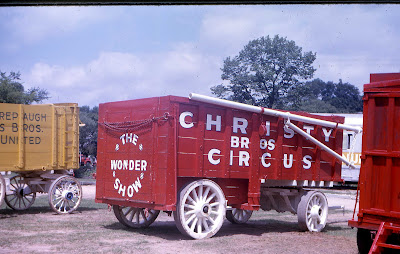 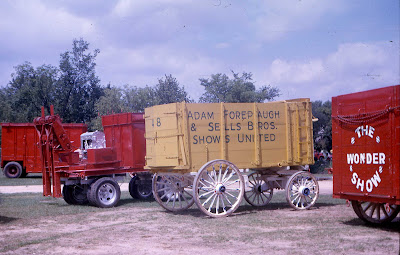 I think these were all used in the train loading show. 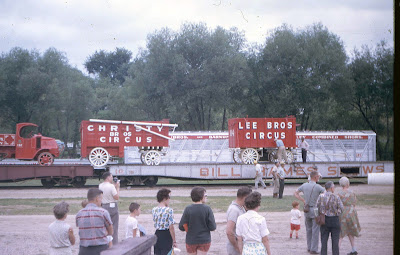 These two Mt. Vernon flatcars were loaded with wagons from Bill Hames private collection when they arrived at Baraboo. These flats were later painted orange and lettered for the 101 Ranch Wild West show as they were traced back to having actually been on the 101 Ranch show before Bill Hames Shows got them.
Posted by Bob Cline at 10:08 PM No comments: 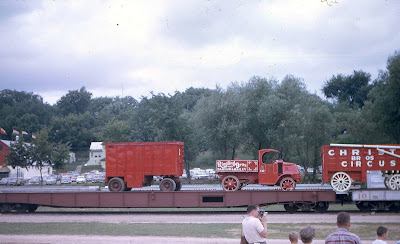 The other Bill Hames Shows car.
Posted by Bob Cline at 10:05 PM No comments: 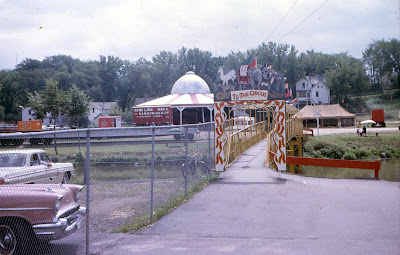 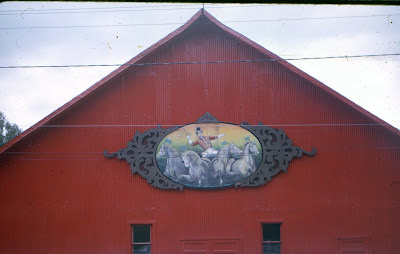 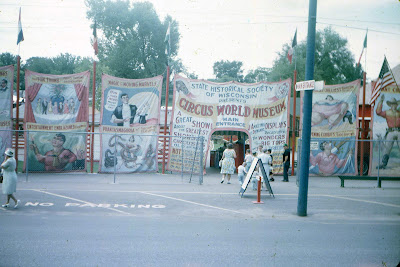 Some of the Circus World Museum's canvas banners in the historical archives were used in a huge display in Madison, WI. earlier this year.
Posted by Bob Cline at 9:58 PM No comments: 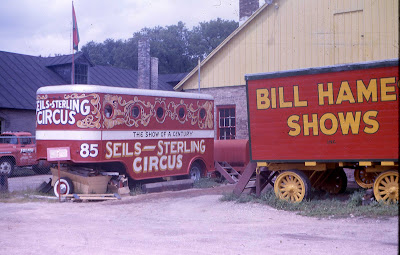 Here's two old show titles not heard of anymore. If I remember correctly, the Seils Sterling semi is the only known piece of that show's equipment still in existence. Where is at now?
Posted by Bob Cline at 9:51 PM 2 comments:

I have been slowly building my Circus website ( http://www.thecircusworld.com ) up with Model Building products. I have several items ordered that should be arriving this week and a couple meetings via phone next week which should add to the catalogue so to speak. I'm also in the process of manufacturing a couple items to start with that will add to the Circus Model Builders delight. More details about those items as they become concrete and reliable.
Posted by Bob Cline at 3:28 PM 1 comment:

The circus was and is a fantastic piece of entertainment to young and old alike. To see the circus, you needed a ticket. Many were professionally done by some of the great old time litho and print shops compared to the mimeographed ones from the 1960's and 1970's to computer generated tickets now a days.
Step right this way now. Everyone needs a ticket. Hurry, Hurry, Hurry!
Posted by Bob Cline at 8:06 PM No comments: 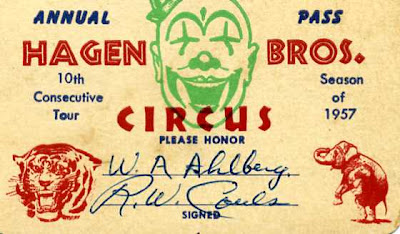 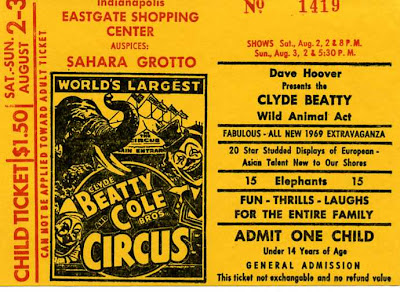 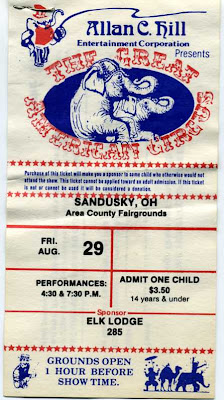 Sunday’s fundraiser at Circus World Museum brought in about $149,000 for the educational and historical facility.
Dollars are still coming in, said CWM Executive Director Steve Freese, adding that he is confident the museum will reach its goal of raising $150,000 through the Circus of Chefs Gala.
"We are so close right now," Freese said.
More than 520 people attended the event, which featured fanciful entrees, appetizers, desserts and beverages made in southern Wisconsin, Freese said.
The 2007 gala had a goal of $110,000 and brought in $158,000. The 2008 event brought in a record-breaking $191,000.
The event is a major source of revenue for CWM, which is under the umbrella of the Wisconsin Historical Society.
Judges evaluated entries from more than 30 restaurants, breweries and wineries and crowned the best of the best with "Silver Tray" awards.
Four firms put forth $10,000 sponsorships for the event, including The Baraboo National Bank, Boldt Builds — Oscar J. Boldt Construction, Full Compass Systems, Ltd., and Hoffman Construction.
Seven other firms offered $5,000 sponsorships, including Capital Newspapers, CEBO Industries, Culver’s Franchising Systems, Inc., Gialamas Company, John Goodall Jr./John I. Hay Foundation, Kraemer Company and Kraemer Brothers, LLC and Teel Plastics, Inc.
CWM listed 25 other firms as $1,250 sponsors.
Posted by Bob Cline at 6:35 AM No comments: 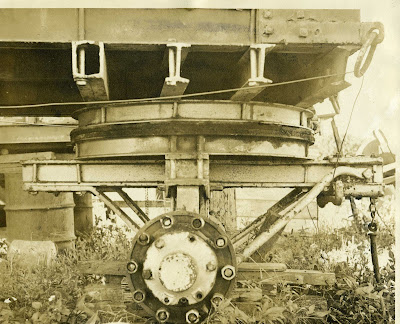 I found this detailed photo in my dad's papers today. There is not a thing wrote on it to know who, what, or where, but it very definitely looks like a circus wagon from here with the mud ring on the front corner. It apparently had dual pnuematic wheels on it from the spindle using 10 lugs. It looks like the wagon pole or tongue pin hanging. You can also see the fifth wheel hooks on the front to chain it so it can't turn on the flatcars. Back on the barrels appears to be another wagon blocked in the air.

Does anyone have any ideas? 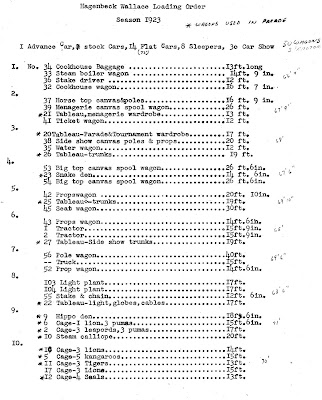 I found these two pages in the papers of my father's collection. I'm not sure who typed this up but I do recognize the small handwriting on the second page as my dad's. Please notice the influence of Boss Canvasman extrordinaire "Cap" Curtis as he created the canvas spool wagons and the seat wagons. I believe he was instrumental in the two arch, three arch, and four arch cages commonly referred to now as the corporation cages as well.
Posted by Bob Cline at 6:47 PM No comments: 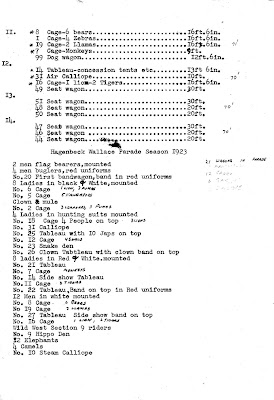 ( You should be able to double click this to enlarge. ) 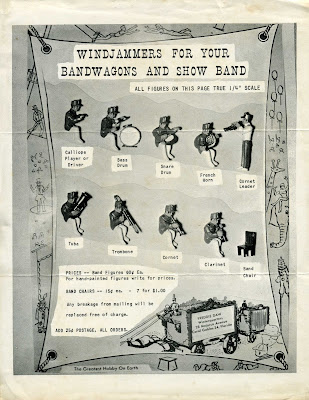 Aside from the plastic drivers made with the Globe wagons, these band members were probably the nicest 1/4" scale figures offered for many a year. I'll bet they could even wear a plume without their hats falling off. 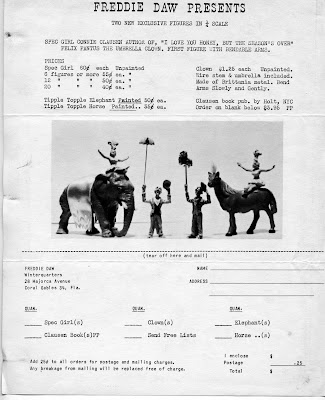 I believe that Joe Yow bought the Freddie Daw collection and was selling them for a good while. 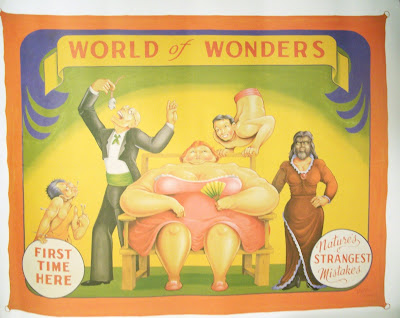 This is an amazing poster that Ward Hall and Chris Christ have had made this year. The original banner was painted by Johnny Meah. This was a nice surprise.
We are back from Ohio. The car is PACKED. It's going to take years to go through all those papers. I also got my aunt and uncle's scrapbooks so there is plenty to share over the coming months.
Posted by Bob Cline at 9:00 PM No comments:

I want to Thank each and everyone of you who sent emails, posts here, cards, etc. What an amazing outpouring of Love and compassion. Many Thanks from my entire family!
Posted by Bob Cline at 8:58 PM No comments: 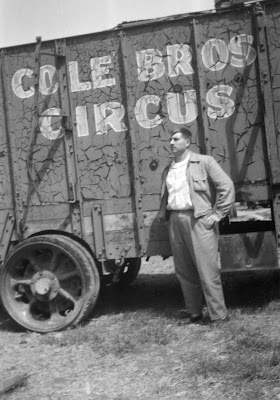 It is with a heavy heart that I am leaving for Ohio in the morning. My father passed away late last night after a lengthy fight with all that ails a person.

Richard Cline was a Circus Model Builder, a Circus Fans Association member and a Circus Historical Society member until he started letting them go a couple years ago.

This blog will be back with bigger and better happenings in about a week.
Bob
Posted by Bob Cline at 6:36 AM 9 comments: 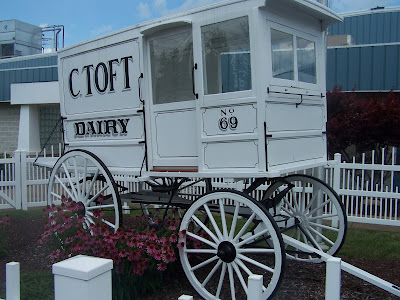 When Ice Cream is the meal of the day, this is the place. Located in Sandusky, Ohio, Toft's doesn't believe in SMALL. Two Scoops fills and overflows the huge dish it comes in. No trip to Ohio is complete without stopping in here. 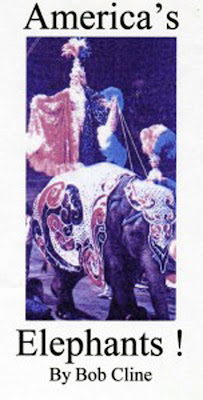 I've had several people ask about my book and where to get it so here it is again. I have it available on my website at http://www.thecircusworld.com It is also available on Amazon.com through their Kindle readers. Every good product needs to see eBay as well so you can find it there also.
What's it about? It's all about the elephants that have travelled across America for the last 200 years. I've covered the scientific stuff, Wm. P. Hall, elephants in the circus, zoos, tragedies, breeding, white elephants, and some of the greatest people that worked with them over the years.
Posted by Bob Cline at 9:33 PM No comments: