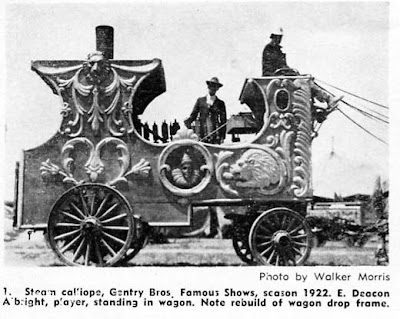 Here is an earlier picture of the following calliope photos before the rear extension was added and the moving of the rear axle. Joe Bradbury's article about these Sullivan and Eagle built calliopes can be found in the Bandwagon magazine in the Nov. / Dec. 1960 issue on pages 3-5. This particular calliope was built in 1902 for the Gentry Bros. Dog and Pony shows. It should be noted here that the Sullivan and Eagle wagon builders created two of these identical calliopes along with the twin ticket wagons for the Gentry Bros. as they had as many as four units on the road in the same season.