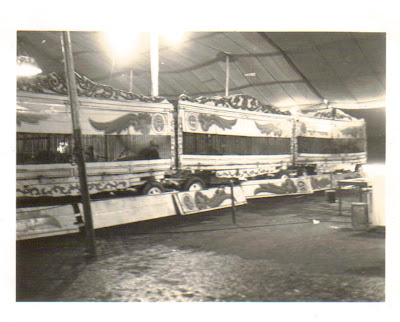 This photo was taken on the Strates Shows in 1951 in Hamburg, NY. I was given some help last night in trying to identify where the carvings came from. You can double click the images to enlarge them. It appears that the second cage in this line carries some of the carvings from the Queen's cage as shown below.

The Third cage has a lion head medallion in the middle of which I have a better picture. I just haven't found where those carvings came from. Two of the scroll work carvings on the third cage did come from the cage below.

Bobby,
Great stuff. The cage wagons, hippo dens, etc. for obvious reasons have always been my favorite of all the circus wagons. Being born a towner I initially assumed they were solid construction, carved three dimensionally from one piece of wood. I was a bit disappointed when I learned a number of years later, I think from John Goodall, that not only were they carved "add on's" but that they actually just took them off of one wagon and secured them to another. Oh well, as they say "that's show business." I was somewhat surprised at the "quality" of some of the carvings upon first seeing them in person, as photo's did them a greater justice. Having always assumed and compared them to master carvers of the Renaissance Royal carriage era I felt they were amateurish, but after spending a few years on the road finally understood the need for "substance" instead of "art." Anybody(I am assuming not many on your blog) who has not made the pilgrimage to Baraboo or Peru to see these magnificent history pieces live and in person owes it to themselves and their families. For me personally, the best vists to Baraboo are in the fall when there is almost nobody there, and you are left by yourself in the quiet, sitting for hours just staring and studying the incredible display of wagons.

Thanks Wade! Actually the transferance of carvings was an entirely new concept to me as well. I had no idea.

I have been incredibly fortunate to have been led down the circus historical highway by some of the best historians out there who have been more than kind in making a few stops along the way to explain some of the changes and differences that occurred.
Bob