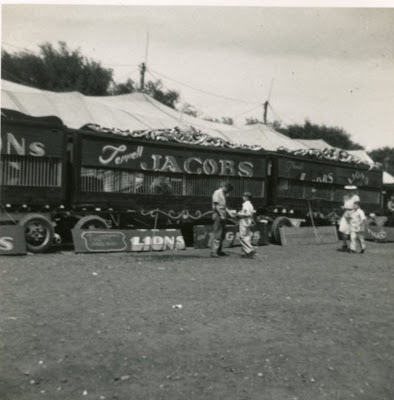 Here's a challenge. Identify the wagons that were the sources for the skyboard carvings on Jacobs' big cages.

Good thing I'm off today. My initial observations are that they did not exist in 1945 but they are there in 1947. The search continues.
Bob

Bob: Wonderful photos. Who was the photographer/collector? The late RBBB trainmaster Charlie Smith, who performed on Ben Davenport's Society Circus in the early 1930s, took credit for introducing Davenport to Harry Hammill, who took Austin Bros. on the rails. (Smith worked in Hammill's WWII parachute-packing business at Coleman, Texas,) Hammill bought out Eva Davenport's share in Dailey Bros. in late 1948 after Ben and Eva separated. The partnership broke up in September 1950 when the grift-ridden Dailey Bros. Circus went belly up at Hope, Arkansas.

Lane,
I have no idea who photographed these. They aren't marked.
Bob

Bob & Lane;
Some of these photos are in that Bandwagon article and they are credited to Bob Parkinson.
Jerry Cash