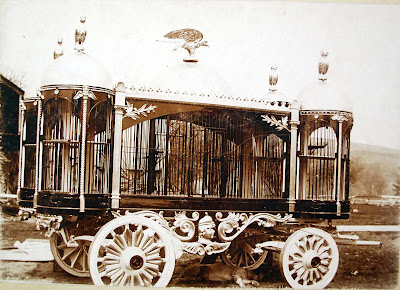 Cottage cages as described by Richard Conover, noted circus historian, was a cage with anything other than a flat roof. The John Robinson's 10 Big Shows exemplified this idea to the max. when they created 30 distinctly different cottage cages for their 1906 parade. I've been researching them as much as possible for a good while now.

Would anyone have any photos they could share with me in my research of these cages? Remember there were odd shaped roofs on wagons and cages both on many shows at the turn of the century. If you have any photos and could share them, please email me at fivetiger@shtc.net
Posted by Bob Cline at 10:29 PM

Bob,
Why do you suppose there are so few of these elaborate, beautiful left today?
Wade

Wade,
That's a great question. John Robinson had the largest and most elaborate collection of cottage cages. When Mugivan and Bowers bought the John Robinson show in 1916, they only wanted the title so all the equipment was sold or stored. Much of it burnt in the 1923 wagon burnings at the Peru, In. winter quarters.

Several of the cages survived and were used on various shows as late as 1932. Consequently, the 1938 burnings and then the last one in 1941, consumed almost all of these great wagons.

A couple were sold to the Al G. Barnes Circus in 1928 with one of those lasting into the late 1950's when it was sold to the Disney Studios. It ceased to exist out there.

The 20 footers in particular always made me wonder about the integral strength on a mud Show. Ringling for example ended up cutting the 22 footer they had way down a couple years later.

There was always the business side to consider as well. The shows were in business to make money not be sentimental. Saving something they didn't plan on using again was a waste of money. Keep in mind that many other great wagons that wewre highly carved pieces of art perished over the years in such instances as the Barnum and Bailey winter quarters fires or simply rotting away in Sarasota and Indiana as examples.

Bob,
Thank you, I didn't realize that many of them had been destroyed, and cutting them down would have made sense, as you explained it. It's a shame, because in my eye's they are more unique then bandwagons and such. Like the bear pits of old, gone and not a moment to soon, but not forgotten.
Wade

Jim,
In the South they are a delicacy, but in the North, specifically Wisconsin it is a place under the shoulder, tween thy teat and bicep, where hairy bear like bagpipers place the hide bag for easy squeezing. I would have thought you would have known that. LOL
Wade

Are you guys thinking of bear claws?
Bob Kitto

Bob,
I think you meant the "Bare Clause", which is in every Wisconsin pipers contract stating that "although au natural is encouraged, in case of high winds(technically an act of God and nature), it is mandatory that skivies be worn under thine kilt.
Wade