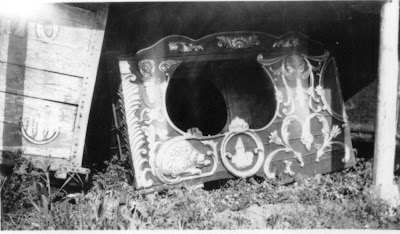 This response came from a good friend. Obviously, we all learned something from this. Thank you so much for helping to tell the tale correctly.
Bob


The Blog magicians must have changed the methodology by which comments can be posted on your and Buckles blogs, so what I wrote yesterday about calliopes never got posted.

The two steam calliopes you illustrated were not the source of the Terrell Jacobs cage carvings.

The long calliope was that from the 1903 Luella-Forepaugh Fish Wild West, which went to Gollmar Bros. 1903-1916 and then James Patterson through 1922. George Christy bought it and shortened it and in that form it served him through 1930, then Cole 1935-1937 and Robbins 1938. It was scavenged for carvings for the 1939 Cole calliope that burned in February 1940. A few fragments from the Christy-era body survive today.

The other calliope you illustrated was one of the Gentry 1902 twins. That one ended up on the Gentry unit that went to the King brothers in the 1920s. It served them through 1930 and eventually the wagons went to George Christy. He sold them off to various places, with the calliope going to magician Karland Frischkorn, who converted it into a semi trailer. In that form it exists today at Peru, IN.

The calliope that served as the source of the Jacobs carvings is the one in the attached view. It was the other 1902 Gentry twin. It ended up in the possession of Mugivan & Bowers in the late 1910s and was converted into an air calliope in the 1920s. It last served on the 1934 Hagenbeck-Wallace outfit. You can probably find several photos of it in service then, as well as on JR in the 1920s.

You can see the wagon in the attached view taken at the Peru quarters wagon shed, sometime 1935-1941, source unknown, but I think there's one like it from Koford. You will note that the carved mask is missing at the top rear area, along with other pieces. The residue was burned in November 1941.
Posted by Bob Cline at 4:15 PM

At one time the shell of the Forepaugh-Fish wagon was in the hands of Alex Clarke of Princeton, NJ. It this the "fragments" referred to above?

After the instrument was taken out and installed in the new Cole Bros wagon (which burned in 1940) the old wagon is said to have remained at Rochester even after the Cole show moved to Louisville, and Clarke purchased what was left of it in 1946- does anyone know from whom he bought it? Mr Terrell?