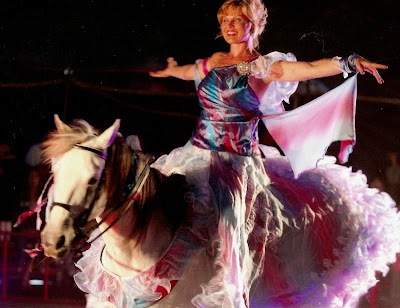 The new performance season at Baraboo's Circus World historic site promises to be exciting with the return of a horse-and-rider act, trapeze artist, acrobats, magician and clowns, says the performance director. The Circus World grounds and exhibits will open to the public April 18. The performance season will begin May 21, said David SaLoutos, who performs as the circus' singing ringmaster. One bright spot this year is the return of trick rider Heidi Herriott, who began her performance career at Circus World during the 1960s, he said. "We haven't had horses for a number of years here at Circus World, and a female equestrian in particular," SaLoutos said. An added element that is expected to boost interest is the new circus movie "Water for Elephants," featuring Reese Witherspoon in the lead role as a circus equestrian. The film will premiere April 22. The museum provided historic circus wagons, photographs, documents and advice to the filmmakers. Circus World is preparing to open an exhibit on the movie next month, SaLoutos said. Herriott said her parents were animal trainers and performers at Circus World. It gave her and her three sisters a chance to perform in a variety of ways. "My parents had performing animals and we assisted with the animal acts," she said. "I used to ride the elephants; we had little pony carts." "For us, it's where we started performing in little ways," she said. "Then my parents got a chance to perform with Ringling Brothers, the largest circus in the country, and it took us away from Baraboo. "My sisters and I still consider Baraboo where we grew up," Herriott said. SaLoutos said in addition to Herriott's riding act, the circus also will welcome the return of David Rosaire and his Perky Pekes trick dog act. "They were a crowd-pleaser,' he said. "It's just hilarious." From Belarus, the acrobatic pair of Slava and Kristina will present a comedic hand-balancing act, SaLoutos said. Kristina also will perform a hula-hoop act and Slava performs a rola-bola show, balancing on rolling metal cylinders. Circus World also will debut a new trapeze act by Hannah Crist, sister of illusionist Tristan Crist. Since 2008, she has been studying aerial routines in preparation for this summer's performance season. Hannah will perform with her brother in the Ring of Illusions magic show and in a comedy magic performance created by Tristan Crist. Once each day, Hannah Crist also will perform the "Slide for Life" over the turbulent Baraboo River, said SaLoutos. "We'll actually have two clowns this summer. Neal Skoy (Roger the Clown) and the other is Greg Parks," he said. "He's another veteran of Ringling Bros. & Barnum and Bailey Circus." They will also have two different elephant acts, SaLoutos said. SaLoutos said Herriott's daughter, Cassidy, will lead the Kids' Interactive Circus performance. She also will participate in the Ring of Illusions magic show, incorporating an aerial act into the magic show. "Nobody does just one thing at Circus World," he said. Herriott said she is leading a life in the circus while being married and raising the third generation of Herriott family circus performers. While family life as circus performers has its problems, she said, it is like being a family of farmers. "Everybody understands from an early age what it's like to be a team player, to have responsibility, to be part of something bigger than yourself," she said. "Frankly, I think it's a lesson a lot of today's kids in today's world could use." Herriott said the Circus World show's aim is to present something for the whole family. "I think we've got a real nice lineup this year. Very fine," SaLoutos said. "I want to see everybody at the circus."