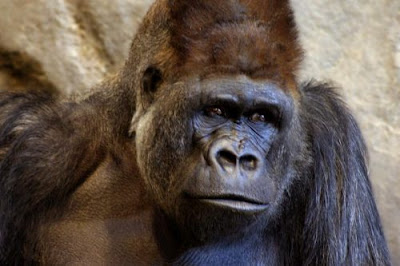 A Western Lowlands Gorilla escaped its captors this morning at Riverbanks Zoo in Columbia, S.C., injuring a food service employee and forcing a lock down of the popular regional tourist attraction.
Some local TV stations are reporting that the animal ran wild for nearly an hour, although Zoo sources say those reports are exaggerated.
“There was only an animal outside of its containment for five minutes,” Riverbanks spokeswoman Lindsey Burke announced. “The duration from the beginning of the incident until the all clear was sounded was forty-five minutes.”
Burke confirmed that a food services employee had been injured in the breakout, but could not provide an update on the status of the employee’s injuries.
According to Riverbanks’ website, the zoo currently has three gorillas (Chaka, Mike and Kimya). The all-male group was transferred to South Carolina from Philadelphia Zoo five years ago.
Western Lowlands gorillas stand approximately five feet high and can weigh as much as 450 pounds. They are generally regarded as peaceful. Burke confirmed that “Mike” was the gorilla who escaped containment.
Officials with the Riverbanks Zoo & Gardens in Columbia say the gorilla climbed a piece of bamboo hanging over its enclosure to escape Friday morning. Zoo Executive Director Satch Krantz says a piece of bamboo the width of a dime drooped into the gorilla's enclosure, and the animal was able to climb it and escape its cage.