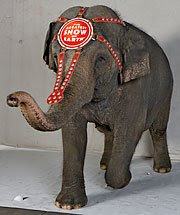 I Got this from John Goodall today.

Feeding frenzy! Man vs. elephant in new Coney eating spectacle
By Mike McLaughlin
The Brooklyn Paper
An elephant like this will take on humans in a hot dog bun-eating contest on July 3.
Through the eons, the human race has never faced a challenge like this before — an eating contest against elephants!But Coney Island is bracing for just such an unprecedented spectacle on July 3 with three brave — and perhaps naïve — souls daring to square off in a hot dog bun-eating contest against a trio of pachyderms from the Ringling Brothers and Barnum & Bailey Circus.
The human are hoping that their superior intellect comes into play. For instance they can dunk the rolls in water [to minimize their volume],” said George Shea, the president of the International Federation of Competitive Eating, the governing body of all stomach-centric sports that is sanctioning the contest at the Ringling Brothers circus site on West 21st Street. The human gustatory gladiators have another advantage over the gentle vegetarian giants.
Perhaps the elephants won’t understand the word ‘Go,’ Shea speculated. The rules are simple. Whichever team eats more standard-issue frankfurter rolls in six minutes will be declared victorious. Individual honors will be dispensed on the single creature that stomachs the most starchy carbohydrates. The odds are clearly in the elephants’ favor. According to circus handlers, the beasts gorge on 200 pounds of food a day and can devour a loaf of bread, a staple of their diet, in one and a half seconds.
When most people see elephants, they see the majesty of nature. To me, I see an arrogant animal that needs to be taken down a notch,” said an unabashedly pro-human Shea. A win for mankind would be a major breakthrough in the world of inter-species eating contests. A Kodiak bear once thrashed six-time hot dog-eating champion Takeru Kobayashi.The gluttonous grudge match between man and beast comes on the eve of the annual July Fourth Nathan’s hot dog eating contest, an all-human affair that will see a rematch between two-time world champ Joey Chestnut and Kobayashi.
Posted by Bob Cline at 12:10 PM