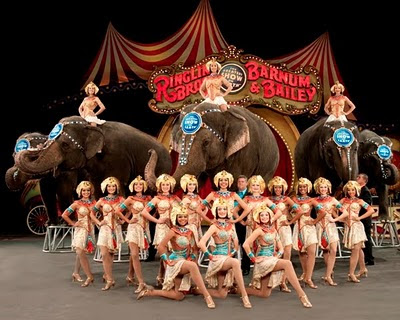 I was delighted with the Ringling Blue unit show. As a guy that enjoys good cage acts, Daniel Raffo's tiger act wasn't that good.

Kudos to the prop crews as they did a remarkable job of setting up and moving stuff at all times with out a hitch.

The four video screens on each side of the arena added some great historical content during some displays and good graphics such as the name of each act in lights.

The flying act was a novel turn with flyers literally flying on top of each other. They missed the triple and quad but in all fairness, they aren't flying from a regulation rigging either. The flyer starts much higher than the catcher which is buying them more hang time than the legends such as Tito Gaona and Miquel Vasquez who made their fame with a regulation rigging. The general public doesn't know the difference however.

All in all, it was a good show.