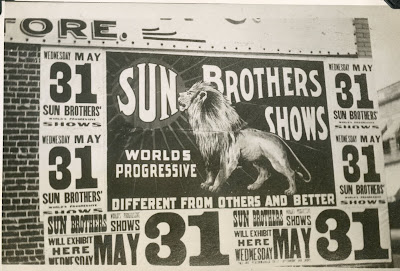 The Sun show is said to have been the first circus Clyde Beatty ever saw. Maybe this lion called him?

Hello Dave,
I have a question about Sun Bros. and date sheets.
I have a one sheet date sheet for "Sun Bros. RR Show" and it is for Monday Aug.31th and does not list the town I believe either. The question I have is that it is not a paper date sheet, but rather a cloth one. Was it common to print date sheets on cloth? Or maybe they just used them with the reusable cloth banners that were taken down by the show? Maybe it was easlier to tack all of it up, instead of tacking the banner and pasting the date?
thanks, p.j.

RBB&B had cloth date sheet banners and they were tacked up just like the regular cloth banners.
Bob Kitto

Thanks Bob for the information.
p.j.

PJ: I just saw your question and I agree with Bob. Cloth banners were both dates and pictorials and tacked on brick buildings, usually higher than daubs would have been posted.

The cloth held up to tacking up in the wind. Unlike posted daubs, the banners were taken down and the pictorials reused. In some old route books you will see a "banner puller" listed.

I'm sure you know that lithos were reused on some shows.