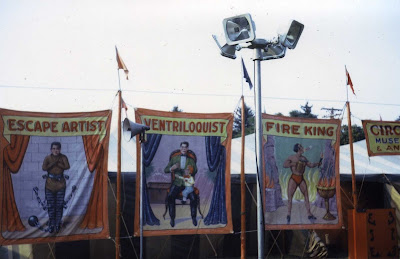 Ah yes, the olde tyme circus side show. This is Circus Kirk's 10 in 1 taken in 1974. The banners were some of the very last Fred Johnson banners he ever painted. Tom Ogden worked his wiles on the crowd for a couple seasons as did Mike Straka later on. I had the great priviledge to work with both of them.

Tom and Mike have become professional magicians in their own rites. Tom is a published author many times over and Mike continues with 200 some shows a year.
Posted by Bob Cline at 7:57 AM

The last I heard Victor Flores has these banners. Jim Hand used some of them on his tent shows in the 80's. He sold most of then about 1990 at the ShowFolks FleaMarkt in Sarasota for $75. each. I bet he wishes he had them now. Worth multi-thousands. Win some, lose some.