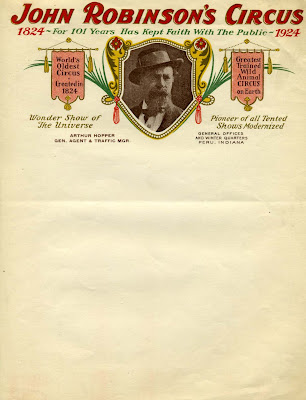 As you can see from this letterhead, Jerry Mugivan was very proud of the John Robinson name, and its legacy which he felt was worthy of keeping associated with the circus business.

The March 6, 1916, contract for the sale of the JR show to Mugivan and Bowers specified $50 “and other valuable consideration” estimated to be closer to $40,000, not $15,000. Fourteen railroad cars were sold, not 15, which were stored in Chicago and in Scranton, PA. Forty-one wagons stored at Terrace Park quarters were transferred as well as a lioness, mule, and six horses that were in California (probably from when John G. Robinson worked at the Selig zoo). Within weeks, the old wagons were sold to Ben Wallace who peddled some of it; the rail cars were also sold off. The “Ten Big” title was expressly conveyed to Mugivan and Bowers and it was stated that John G. (John III) could use his own name for booking his animal acts in vaudeville and at fairs, etc., but John G. was prohibited from using the “Ten Big” phrase. Soon after the sale, John G. lamented that he sold the title, entertained the idea of fielding another circus, and in the mid-1930s negotiated with Adkins and Terrell at various times to lease them the title, which they very much desired. Because it was unclear whether the Corporation could sell the title to Ringling or not in 1929, Adkins and Terrell bowed out of negotiations as they contemplated a second show and instead leased the Robbins name from Milt Robbins, certainly a close enough approximation without potential legal hassles.
Dick Flint
Baltimore

Thank you for your comments Mr. Flint. I appreciate your input. Since both you and I have just recently spent some time in the John Robinson papers that are located at the Cincinnati Historical Society Library, I would like to point out that the contract you are referring to dated March 6, 1916, was drawn in the State of California, County of Los Angeles and is shown in its entirety in Richard Conover’s book, “Give em a John Robinson.” on pages 84-86. The footnote that Richard made alluded to $30,000 to $40,000 for other consideration but no records have ever been found as such. This contract does state 14 railroad cars. It is indicated it is signed by John G. Robinson and Lenora Robinson.

John F. Robinson, ( John G’s father ) sold all holdings to John G. Robinson in contracts dated January 26, 1909 as recorded in the Hamilton County, ( Ohio ) Recorder’s Office. Thus, John F. no longer had any circus property in his name. This contract spelled out the assumption of liability by John G. Robinson in exchange for circus title, show property and use of the Terrace Park winter quarters.

By 1916, when the possibility of a sale came about, Jerry Mugivan found out about all this and had an agreement drafted that authorized the payment of $15,000 to John F. Robinson for the show equipment he was getting from John G. Robinson. This agreement was dated February 28, 1916 in Miami, FL. And drawn by the Law Firm of Shutts, Smith, and Bowen. A 2 page purchase contract was then drafted in the State of Florida, County of Dade, providing the purchase price of $15,000.00 to John F. Robinson. This contract offered 15 railroad cars. It lists an additional flatcar in Chicago as # 53. I must add this contract is not witnessed or signed as legally, John F. Robinson wasn’t the owner of any of this, his son John G. was.

That brings us back to the California contract signed by John G. dated March 6, 1916. Now for some more circus history concerning these transactions. In the signed contract listed in the Conover book, the property in Chicago is listed as leased to A. B. Miller Carnival. However, the A.B. Miller contracts leased only three flatcars numbered 51, 52, and 53, one elephant car # 20 and coaches 81, 82, and 83. This allows for great confusion. One could say they were renumbered, but the car count doesn’t add up to the 1916 contract with Jerry Mugivans.

Additionally, two signed letters also confirm the $15,000.00 payment for the entire John Robinson show when Jerry Mugivan wrote to John F. Robinson on March 2, 1916 ( four days before signing the contract in California ) confirming Mugivans had already deposited the $15,000.00 in the Fourth National Bank and would transfer it immediately upon John G’s signing.

Another letter dated March 31st, 1916 to John G. Robinson out in California states that after looking over all the show equipment, he found none of it worth keeping and sold the 15 cars and equipment to John Warren for $5,000.00 He had been given an estimate of $7,000.00 to repair the stuff to make it road ready again and felt it wasn’t worth his trouble.

Thusly, Jerry Mugivan and his partner Bert Bowers had now secured the fabled title of John Robinson for the $10,000.00 they didn’t recoup from the sale of the show property and Jerry Mugivan didn’t sell the show to Ben Wallace at all. Wallace obviously bought it later, presumably from John Warren who was probably looking to make a quick hustle.