Before they could be saved by Museums...... 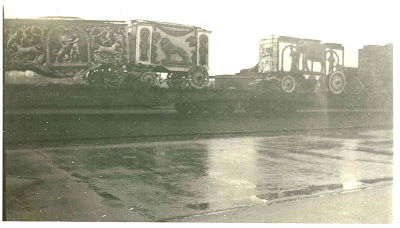 Before these wagons could be saved by any Museums, they were saved by Ringling Bros. and Barnum & Bailey 15 years before that. A select few wagons were pulled aside to be saved for future use on the Greatest Show on Earth.

These three photos are probably photos of a photo from the glare and poor quality in them. There is no mention of the photographer but they are marked April 4, 1944 in Peru, meaning they were in storage in Peru for nearly three years after the last huge wagon burning in 1941.

Photos taken by Chalmer Condon of the last 5 wagons to leave Peru on April 8,1944. 1st wagon was what was left of a Barnes wagon (maybe from the light dept.), Gladiator and Lion, Carl Hagenbeck Lion Tab, Sells-Floto Elephant Bandwagon, #110 Barnes light plant wagon.

Earlier the Ringling Bell wagon, the Five Graces bandwagon, Two Jesters, Harp and Jesters, and the Lion-Snake Tab had been sent to Sarasota.

It has been written that it was Chalmer Condon pleadings that saved these from the wagon burnings before the quarters were sold.

But the person we also need to thank would be Jess Adkins for bringing these wagons out of the dusty barns in 1933 and 1934 for the great Hagenbeck Wallace street parades. I think by using them again it brought them back to peoples attention.
p.j.

Would like to make clear what I had written earlier, that the Lion and Snake wagon has become over the years to be called the Lion's Bride wagon. Built by Bode in the winter of 1904-1905 for the Carl Hagenbeck show. Used as the #1 bandwagon till 1925 and then stored in Peru till the great 1934 Hagenbeck Wallace parades.
Bob Good had some photos of it going down a New York street during the War Bond drives of WWII.
p.j.