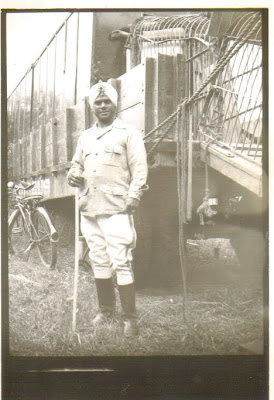 The celebrated trainer of leopards was fresh off his triumphant tours on the Ringling / Barnum show where he had been a part of the Alfred Court cage acts being presented in all three rings. As James Edgar assembled his Sparks Circus in 1946 ( Which incidentally was the only time in Ringling history that someone else used a Ringling owned show title other than the Ringling Corp. ) he leased elephants from Ringling and hired acts such as former Ringling great Damoo Dhorte. Here he is caught on film Oct. 30, 1946 in Waco, Texas.
Posted by Bob Cline at 11:57 PM