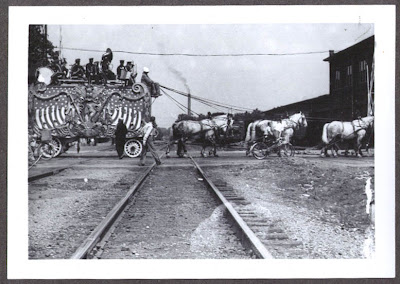 Wade Burck's great blog ( http://circusnospin.blogspot.com/ ) had some discussion on a few of the old circus wagons recently. Racked up in the discussion was the confusion of wagons being called the same thing. Here is a fairly good example.

The notes I have are from Joseph Bradbury's wagon files. This United States Tableau was one of 16 built by the Bode Wagon Co. of Cincinnati, Ohio in 1918 for Frank Spellman's U.S. Motorized Circus. This was originally built to go on a truck chassis. It was only on the U.S. Motorized Circus for a short season before going out of business. Sold to Bob Schiller in 1920 he kept it until 1924 when he sold it to Fred Buchanan. It was then converted into a wagon for Buchanan's railroad show, the Robbins Bros. Circus. When Robbins folded in 1931, the show went to the Wm. P. Hall farm and remained there until Zack Terrell and Jess Adkins bought it for their new Cole Bros. Circus in 1935. This wagon was lost in the Rochester, IN. winter quarters fire on Feb. 20, 1940.
Posted by Bob Cline at 9:44 PM

Just to fill in some gaps for newcomers: Frank P Spellman bought a number of sets of wagon sides (apparently fifteen, though sixteen had been ordered) from Bode for his 1919 U S Motorized Circus. The one which was ordered but never built may have been a Globe. The wagons were mounted on Kelly-Springfield trucks, which unfortunatelky had not been paid for.

When the show failed after just a few days, Kelly-Springfield took the trucks back and sold the sides to Bob Schiller of Marion, Ohio. He advertised them for sale sold five to Frank West: Asia, India, Japan, Mexico and Russia.

Schiller sold eight to Fred Buchanan in 1925 for his Robbins Bros Circus, mounting them on wagons for Fred as part of the deal. These eight were: Africa, Belgium, France, Great Britain, United States (all of which later went to Adkins and Terrell for their operations), China, Panama and South America (all of which rotted at Granger, having been sent back there in mid-1930, although a legend persists that China may have been dismantled as decorations for a restaurant. (See "Gus the Great" for a description of the China wagon in Granger).

Of the Adkins-Terrell five, all appeared on their 1938 Robbins show and on the Cole show for one or two years, but all except France burned in the fire at Rochester early in 1940.

Only France survives today and can be seen at the Circus World Museum.