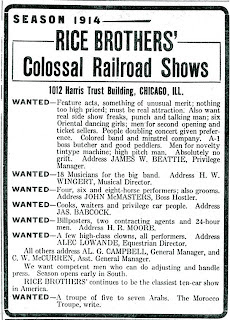 The 1914 season was picking up where the 1913 season had left off for J. H. Garrett. Here we find that Al Campbell is the General Manager. Al Campbell had been an owner of the Campbell Bros. Great Consolidated Shows from 1894 until 1912 when they folded. He then partnered with Lee Greer and Fred Hatfield in 1913 on the Cole Bros. Circus that folded after one season. This ad was found in the Billboard on February 14, 1914 on page 24.