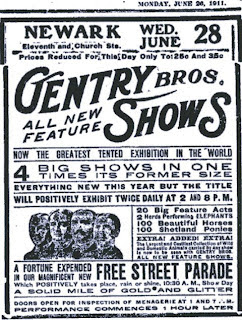 The Gentry Bros., Henry, Frank, Walter, & J.W, had started their show back in 1895 as Professor Gentry's Famous Dog & Pony Show. They used one, two, three, and four units of the Gentry Bros. on the road at the same time usually with one brother taking each unit. This particular title of Gentry Bros. All New Feature Shows was used from 1910 to 1912. In 1911 only Henry, and Walter were still in the business. This ad was found in the Newark Daily Advocate on June 26, 1911.