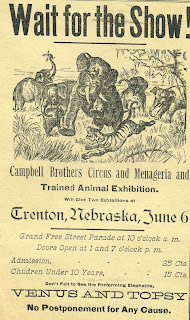 I've been researching the Campbell Bros. Circus for the last couple years now. Here we find a few ads that were used over the years celebrating the purchase of their first two elephants Venus, and Topsy. Both were bought from the Joe B. MacMahon show. Mrs. MacMahon knew Venus was enough trouble that they sent the elephant keeper Nadge with the elephants to remain on the Campbell show to handle the two elephants. This ad was found in the Republican Leader, Trenton, Nebraska, on May 27, 1898.
Posted by Bob Cline at 12:07 PM