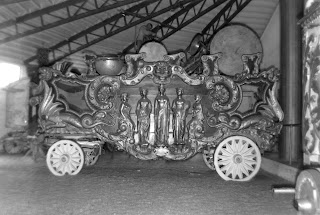 The Five Graces like all other parade vehicles had seen their better days. What still existed was allowed to basically rot away as no show needed a parade wagon by the 1950's. Having been at the Sarasota WQ for about several years, it was listed in a bill of sale dated June 12, 1961 when the basic majority of stuff still at the Sarasota WQ was sold to "Circus Enterprises" a company owned by William W. Perry and Jack Goodman for $10,000.00. This once in a lifetime sale bought the Five Graces, Lion and Snake Tableau, Lion and Gladiator, Elephant Tab, bell wagon, another Bandwagon, the Carl hagenbeck Lion tab, plus lots more cages, wagons, railroad cars and tons of circus equipment as being scrap metal at best. It was then acquired by the Museum of the American Circus. This is now known as the Ringling Museums of Art, the Circus Museum being a part of the complex.
For those that followed the dispersal of the RBBB equipment you'll remember hearing about Goodman's junk yard. Note the owner of Circus Enterprises, above.
Posted by Bob Cline at 11:07 PM