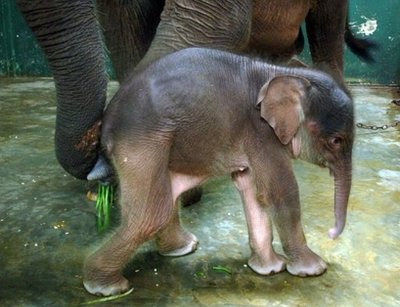 AFP/File – A baby elephant, seen here with his mother at a Safari Park in Indonesia.
Five dead elephants believed poisoned in Indonesia
JAKARTA (AFP) – Five rare Sumatran elephants found dead in Indonesia were likely poisoned for damaging crops, according to an official.
The elephants, aged two to four years old, were found dead in an oil-palm plantation in a village in Riau province on Sumatra island on Friday, conservation agency official Edi Susanto said.
"Preliminary medical checks indicated that the elephants could have died from sulphur poisoning. We're still investigating," he said.
"We suspect villagers killed them using poison for wild boars as the elephants had damaged their crops. We're chasing the perpetrators," he added.
Human-animal conflicts are a rising problem as people encroach on wildlife habitats in Indonesia, an archipelago with some of the world's largest remaining tropical forests.
There are up to 3,350 Sumatran elephants remaining in the wild, according to the environmental group WWF
Posted by Bob Cline at 9:11 AM