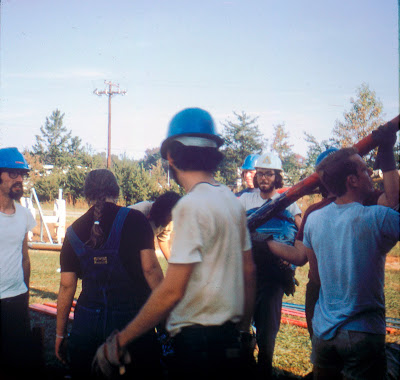 What's a show with out a labor force? Well, here we see side show talker, magician, fire eater and illusionist, Tom Ogden on the far left. Tom went on to become a World Class magician and has authored several books. In the center with his back to you is Dave Fulton who was the leader of the Biggest brass band for several years and worked on film and music later on creating a great documentary on Circus Kirk. To the far right is Craig Carlson. Craig was a Big 10 Gymnastics champion from Minnesota who kept his professional career going on the Nordmark show for several years that I know of. The Blue hard hat in the far back is Middy Streeter a great clown who kept his career going for many years and our show's medic.
Posted by Bob Cline at 8:39 AM