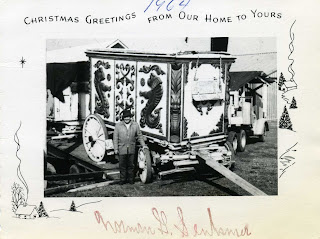 Norm Senhauser was able to buy this Sparks Sea Serpant wagon in 1952. It was at the Chicago Fairgrounds. He also bought the Kangaroo Tab and the Lion and Tiger Tab. In 1964, the Joseph Schlitz Brewing Co. bought these three wagons from Norm Senhauser and donated them to the Circus World Museum. This is the only known Sparks Circus wagon to still exist. This has a long history. Maybe I'll cover it after the New Year.
Posted by Bob Cline at 8:40 AM

Bob, I've been doing research on the early years of the Sparks Circus, especially around the time of Sparks death in NC. Would love to speak with you. Steve Shelton in Danbury, NC.