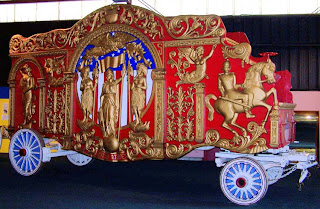 The Circus World Museum’s wagon collection will be seen in several parades in the very near future again. Starting out at the Annual Macy’s Thanksgiving Parade the grand United States Bandwagon will make a guest appearance again this year. The United States Bandwagon was originally built for the Ringling Bros. World’s Greatest Shows in 1903 by the Bode Wagon Works. Ringling used it through 1918 and then combined with the Barnum & Bailey Show to still travel in 1919 and 1920. The wagon remained in storage in the Bridgeport, CT. winter quarters until 1927 when it was taken to the new Sarasota, Fl winter quarters. It was never used again. By 1950, it was in complete ruin with only a few carvings salvaged. When Circus World Museum decided to rebuild this grand Bandwagon, they utilized these few carvings to start the pattern and completely rebuilt this wagon from the ground up. What a beauty it is.
Circus World’s CEO Steve Freese tells me details are still being worked out for a Parade in Baraboo, WI. during the Christmas holidays. The huge extravaganza in Milwaukee next year is scheduled for July 12th with over 50 of the Museum’s wagons being taken to Milwaukee for the huge Great Circus Parade.
Posted by Bob Cline at 5:17 PM