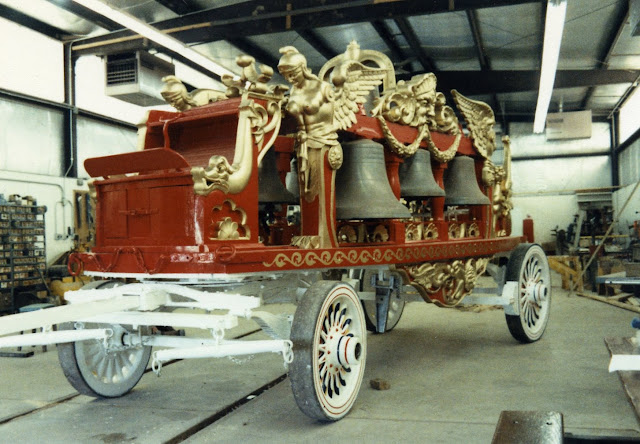 I don't try to voice my opinion very often rather, I prefer to share our circus history for all to enjoy. Sadly, the announcement of the Feld organization wanting to have their wagons and artifacts returned that have been on loan to the Circus World Museum since the mid 1980s has brought out lots of resentment by some and even bad information by others. I just read today where someone was under the impression that many of the wagons at CWM were on loan. NOT TRUE! Yes, the Two Hemispheres Bandwagon is owned privately by John Zweifel but everything else at CWM is there to stay once these six wagons leave.
In my opinion, I see this as a good thing. There's is not doubt in my mind that the Feld organization will take as good as care as possible of these fine examples of the circuses before them. In fact, I imagine, they'll all be spruced up and put in tip top shape again in Florida for the magnificent display they have planned. Yes, the costumes and floats from the Chinese based spec display will all be coming out of the Feld Building. Quite Frankly, YEAH! I love Circus World Museum as much as anyone else does. I don't get to go every year but when I do get to go ( 6 times in the last 10 years ) I've seen the same exact exhibit of RBBB Costumes and floats. Actually, the display has been there for nearly 20+ years.
With the Feld artifacts being removed, the Circus World Museum now has a golden opportunity to display some of their amazing artifacts that they never had a place for in the last 30 years. Just imagine some of the great Circus Parade wardrobe on display, old time circus side show banners, props, or other wagons being highlighted? The Possibilities are endless. The Cinderella float was splendid in the ring with miniature spotlights on it at the Cincinnati Art Museum display of the Amazing Circus Poster Exhibit. Imagine that on a slowly revolving turntable. Ah, yes, the possibilities are endless.
Having the hugely successful gala in the Feld Building has been mentioned as a terrific idea with great possibilities. It's already air conditioned for one. What would you be more excited about? Going to see the same thing again and again and again or going to see something entirely new and different? That's just MY opinion. I'm sure everyone has one.

Here's looking forward to a bright future for our beloved Circus World Museum.
Posted by Bob Cline at 10:53 PM

Certainly the return of these artifacts is not unusual as I am sure Feld org. WAS AWARE OF THIS TIME NOT LETTING THEM GET OUT OF THEIR HANDS AND yes Cwm has so much to finally brought out of storage and certainly is not hurting for historic wagons. I note the a closeness exists more than ever with Feld and Ringling museun es pecially with the gigantic litho didplay given by Feld and also I believe Kenneth is now also on the board of directors of the John And Mabel Museun of the arts. [no small thing to be sure] so it is nic4e to see a working relationship now that Feld org. has a permanent home and busineess here in Sara-Manatee. A plus for all.

Mr. Herriott is correct in that Kenneth was elected to a four year term last year to the Ringling Museum Board of Directors. I think he is also on the board at Boston University as well.
p.j.

My understanding is that the Bell Wagon will return for the summer parades here and there. I will be glad to see a change in the Feld Building as it HAS pretty much remained the same over the last 20+ years. Actually, be nice to bring out the Zwiefel Miniature which has been put away.