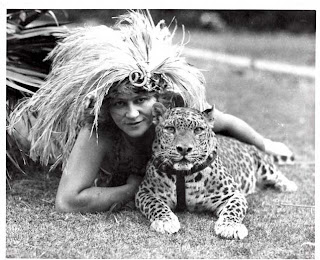 I was sent a bunch of photos a couple years ago that included these four photos of Olga Celeste. IN February of 2011, our friend Roger Smith commented on Buckles Blog about Olga.


Olga Celeste was born April 9, 1888 in Lund, Sweden. Her formative years are very remote, but she had a strong history as the Enchantress of Leopards in early 20th century circuses, notably the Barnes show, and in vaudeville. She worked on at least 4 pictures: JUNGLE REVENGE (1915), a short; DeMille's CLEOPATRA 1934), uncredited as a slave girl, but onscreen with her leopards featured in the dance scene; off-camera trainer to Nissa leopard, who played the title role in BRINGING UP BABY (1938); and as trainer for the leopards needed for TARZAN AND THE LEOPARD WOMAN (1946).
Olga retired in 1951. When her last leopard died then, she did not suffer the cruel demise as did her contemporary, Mabel Stark, who ended her life when her Goldie tiger was shot, in 1968. Olga bore up to retirement, and carried on. Mabel often told me of going to visit Olga, driving herself along the freeways in that massive Buick of hers. That Mabel so enjoyed friendship with Celeste was something of a miracle, since Olga (at times) was also a blonde animal trainer. The decisive factor was that Olga preferred leopards, and was never competitive with tigers. Some time back, a blog contributor noted knowing Olga, and where she lived--maybe he'll re-write his comments to refresh our memories.
In the 1930s, Olga was sufficiently established in Hollywood, that she was invited to sign a shirt with fellow film folks Elizabeth Taylor, then a child star, Abbott & Costello, Cary Grant, Mabel Stark, Louis Roth, and little Shirley Temple. In 2005, bids for the shirt ran close to $1,000.
Look up "Luna Park Zoo" for her history and photos there, where she performed from 1925 to 1931. Co-workers were Louis Roth and Mel Koontz. Admission then was 30-cents.
The Enchantress of Leopards, died at 81, in Burbank, California, on August 31, 1969.