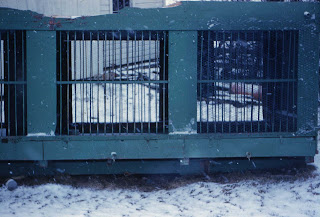 By 1960, the John Wixom Menagerie was done and over with. My dad found out that five of the cages were sitting at Zane Caverns in central Ohio. The Caverns were owned by Richard Zeigler at the time. There were three of these large cages and two small ones with a single axle under them. The three large cages were all on the ground. My uncle supplied a chassis from his farm and they got it raised up and mounted. I remember it stayed outside at our house at least one winter until Dad got it in the garage and started rebuilding it.