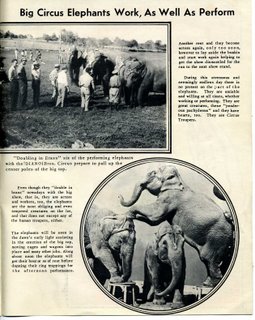 The 1953 season saw the introduction to the Circus World of an all new motorized show entitled Diano Bros. Circus. The show was a labor of love for Anthony "Tony" Diano from Canton, Ohio who was an avid animal collector and a prospering businessman in the building trades with his Concrete company. Circus owner Ben Davenport teamed up with some of his elephants and equipment to make the entire show one of the largest animal collections on the road.
The season was hit hard with turmoils, law enforcement interventions and bad business. It only lasted the better part of one season and disbanded with Ben Davenport giving up his male elephant Tommy to Tony Diano as part of the settlement of properties.
The show carried a total of 15 elephants. Ben Davenport owned eight. They were:
Myrtle, Jenny, Cutie, Luna, Hank, Tommy, Tex, and Nellie. Tony Diano owned seven elephants. They were: Mysore, Calcutta, Katy, Young Tusko, Betty, and two female Africans named Uganda and Nackatala. Upon recieving Tommy at the end of the season, Tony Diano kept three of these Tommy, Mysore, and Calcutta along with two others he added later named Minnie and Dolly until he sold them all to the Ringling show in 1985 when his health was starting to fail. Tommy then passed on the Show Business trail as "King Tusk".
Posted by Bob Cline at 8:57 PM

I rode one of the elephants in 1976, little Tony. The elephant trainer was my dad's friend at the Diano Ranch. I was six years old then. If anyone has any pictures they could share with me please give me a call at 909-838-5649. My father's name was Verle Meek. I am Michael. I do not remember anyone, but do remember the ranch well. I fed some horses with Tony himself. He had trucks of english muffins delivered. We fed them from wheelbarrows.

When I was a kid we lived in Canton, OH and my dad, George Becker, knew Tony Dianno. I remember visiting his ranch and getting the tour with Tony. He told us how the buffalo could jump down into the circular pit, a fall of about 10 feet, land right on their head, and not get hurt. He also warned us about what the gorilla would do if he got excited! Dad was a salesman for General Foods at the time and he arranged for Tony's giraff to be displayed at Carm's Market for a promotion that he'd dreamed up for Jello. The giraff was christened, Geeno the Jello Giraff! I've often wondered if the ranch is still there.